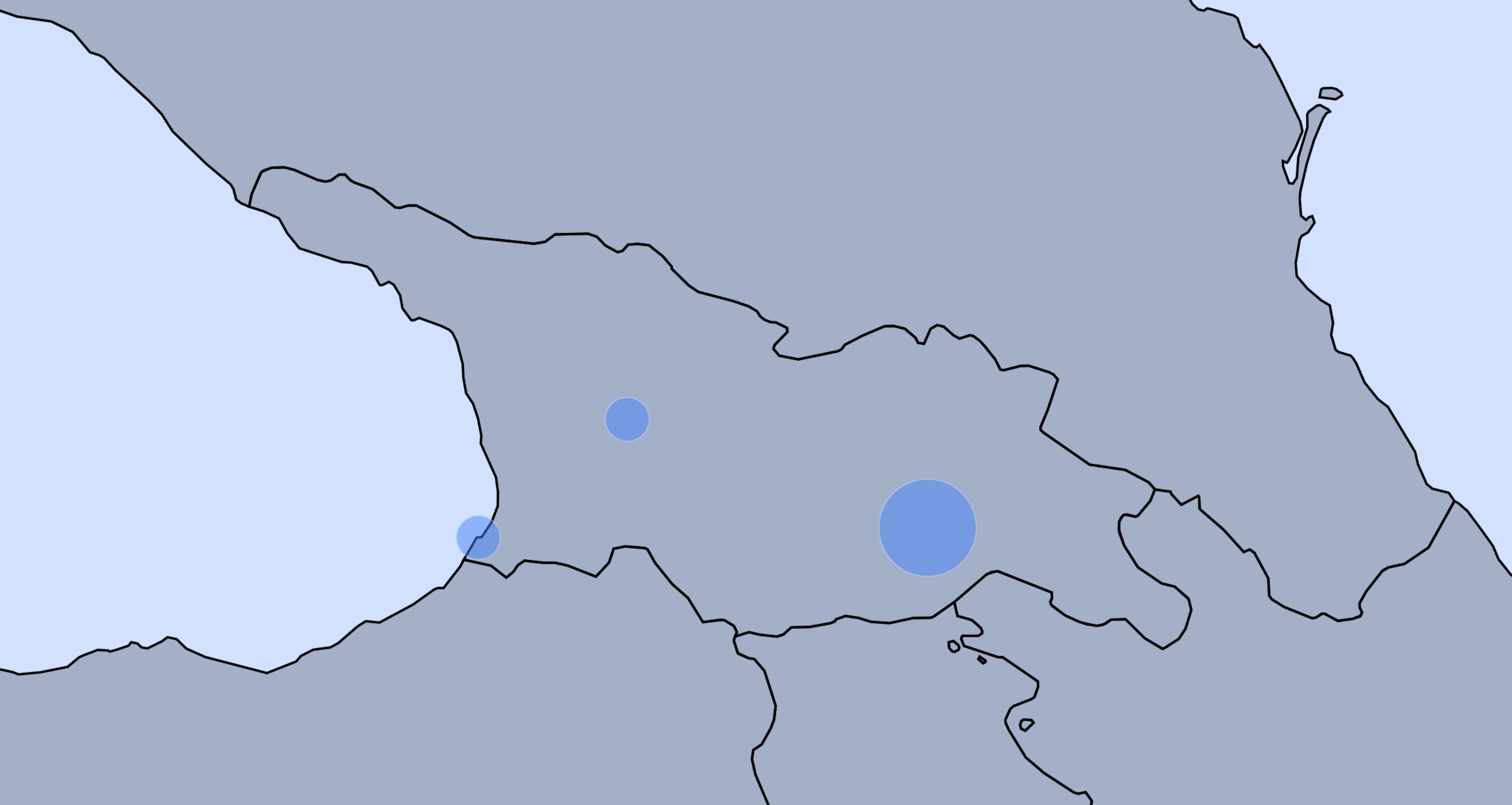 Fifteen HPSR-related institutions were identified in Georgia: 13 of them in the capital, Tbilisi, and one each in Batumi and Kutaisi. Almost half are university-based, and more than a quarter are NGOs.

Georgia has been implementing major reforms since 2013 to expand the provision of state-funded health care. These reforms have not, however, been backed by proportionate investment in HPSR. At the same time, external support has dwindled as Georgia’s economy has grown. This lack of funding has limited studies on the impact of reforms, and research tends to be fragmented. HPSR production capacity is growing, but greater efforts are needed on research dissemination and the generation of evidence to inform policy.

Research evidence has influenced policies on drug abuse and on the purchase of tuberculosis (TB) services at hospital level and there have been growing connections between policy-makers and research bodies in recent years. However, it could be difficult to sustain the bridging of policy and research in the absence of adequate funding and robust institutional changes.

Georgia has increased its investments in health through the introduction of its Universal Health Care Program in 2013, which has expanded the coverage of state-funded health care and increased public spending on health. This has not, however, been accompanied by commensurate allocations for HPSR. As a result, research on the impact of health reforms has been fragmented and relies on external funding. For its size, Georgia has a relatively large number of institutions capable of carrying out HPSR to inform policy, but the lack of state funding limits the pace of development in this field, hampering evidence-informed implementation of reforms and course correction.

External assistance to Georgia has dwindled as it has attained upper-middle-income country status, limiting the resources needed for the further development of HPSR and its outputs.

A change of leadership in the Ministry of Internally Displaced People from the Occupied Territories, Labor, Health and Social Affairs (MoiLHSA) in late 2019 led to greater outreach to the research community, with the ministry seeking out evidence for decision-making and facilitating discussions with donors on additional funding for evidence generation, particularly in response to the COVID-19 pandemic (albeit without any allocation of funds from the state budget). However, on a greater scale the sustainability of such ad hoc donor initiatives/funding could be at risk without solid institutional changes and without stable streams of research funding.

As a result of funding constraints, the number of published papers in peer review journals has stagnated in recent years. However, the number of research reports has increased from 32 in 2018 to 53 in 2020: the majority of them produced by the Economic Policy Research Centre with the financial support from USAID.

Engaging policy-makers and the public

Despite the constraints presented by limited funding, research evidence has been communicated effectively and has managed to influence health policy. One example is the amendment of Georgia’s National Drug Policy, where groups working on issues related to drug addiction and its impact on society and health services worked with activists to advocate for changes in drug policy and attract the attention of Parliament. Researchers then engaged with the relevant parliamentary committee to share evidence that resulted in some policy changes. In another example, in 2019 researchers examined so-called adverse incentives in TB service purchasing at hospital level at the request of the MoiLHSA, which were resulting in longer hospitalizations and higher prices for TB care. The evidence generated was used during numerous engagements with key stakeholders, including the MoiLHSA and the State funder of TB care. As a result, the provider-payment method was changed, economic incentives were aligned for optimal inpatient treatment and higher incentives were introduced for outpatient care.

An average of 34 meetings were held each year from 2018-2020 to inform policy discussions and decisions, though it is not possible to determine whether all of these meetings led to policy changes. The number of newspaper articles related to HPSR has increased, rising from 76 in 2018 to 113 in 2020.

The number of HPSR faculty members has remained fairly steady since 2018. Based on the respondent feedback, there are on average 10 individuals involved in teaching and/or conducting HPSR in each of the seven universities. In total Georgia might have over 100 individuals actively involved in conducting HPSR (assuming that academic staff are also involved in the non-educational research institutes). The number of students participating in HPSR courses rose from 53 in 2018 to 71 in 2019, before falling to just 16 in 2020. Several institutions reported the small number of participants enrolled in HPSR-focused short courses from 2018 to 2020[1], and all of these institutions reported fragmented practice.

The increase in the number of reports suggests that HPSR production capacity is growing but that research dissemination and evidence to inform policy need additional work. Respondent feedback also signals that more (particularly young) researchers are involved in cross-disciplinary applied research with a significant potential to inform policy and programme decisions, but a full understanding of the need to translate/disseminate evidence to policy-makers seems to be lacking. These young researchers, although few in number, tend to be engaged in PhD or post-doc programmes organized jointly with universities outside of Georgia.

[1] It has been difficult to determine the HPSR focus of the training courses noted by respondents, as web-based descriptions were not always available, and their content could not be validated.

Funding for science and HPSR is not, unfortunately, a priority for the government and Georgia has no dedicated national budget for health research. It does have budget allocations for the science field (including both fundamental and applied) administered by the national science funding entity, the Rustaveli Foundation. It is not possible, however, to separate national/state budget expenditure on health and on HPSR from that spent on science overall, as the expenditures are not categorized or disaggregated.

While it is not possible to provide a precise figure for the total amount of funding spent on HPSR in Georgia each year, it is estimated to be somewhere between US$ 0.8 million and US$ 1.5 million, including funding for both research generation and dissemination activities. Dissemination funds are usually part of research grants and not possible to separate. Most of the funds are external and are secured either through international research funders such as United States of America National Institutes of Health, the United Kingdom Medical Research Council and European Union research programmes. Some HPSR funding is embedded in programme or project funds supported by multi-lateral donors – such as the Global Fund to Fight AIDS, Malaria and Tuberculosis, UNDP, UNFPA, UNICEF and WHO – or by bilateral donors like USAID and Sida.

About 15-17% of the estimated amount comes from national sources: primarily state funding followed by universities’ own funds, with the salaries of research staff covered by universities as an in-kind contribution to research projects. Non-university-based researchers, however, have little or no access to national funding sources.

Under the terms of this licence, you may copy, redistribute and adapt the work for non-commercial purposes, provided the work is appropriately cited, as indicated below. In any use of this work, there should be no suggestion that WHO endorses any specific organization, products or services. The use of the WHO logo is not permitted. If you adapt the work, then you must license your work under the same or equivalent Creative Commons licence. If you create a translation of this work, you should add the following disclaimer along with the suggested citation: “This translation was not created by the World Health Organization (WHO). WHO is not responsible for the content or accuracy of this translation. The original English edition shall be the binding and authentic edition”.

Any mediation relating to disputes arising under the licence shall be conducted in accordance with the mediation rules of the World Intellectual Property Organization (https://www.wipo.int/amc/en/mediation/rules/).

Third-party materials. If you wish to reuse material from this work that is attributed to a third party, such as tables, figures or images, it is your responsibility to determine whether permission is needed for that reuse and to obtain permission from the copyright holder. The risk of claims resulting from infringement of any third-party-owned component in the work rests solely with the user.

General disclaimers. The designations employed and the presentation of the material in this publication do not imply the expression of any opinion whatsoever on the part of WHO concerning the legal status of any country, territory, city or area or of its authorities, or concerning the delimitation of its frontiers or boundaries. Dotted and dashed lines on maps represent approximate border lines for which there may not yet be full agreement.